Q) What does the abbreviation "FET" stand for?

NJ2X Notes:
Many consider the transistor to be one of the greatest inventions of the 20th century. FETs are voltage controlled devices. The Field Effect Transistor enables one electrical signal to control another.

NJ2X Notes:
Check out NJ2X.COM for other FCC Technician Exam questions related to the schematic symbol.

Q) Which of the following devices is most useful for VHF weak-signal communication?

A) A multi-mode VHF transceiver

NJ2X Notes:
The advantage of a multi-mode VHF transceiver is that it allows for communications in modes other than FM such as CW and SSB which perform better in weak-signal communication applications.
on February 26, 2014

Q) How is a semiconductor diode's cathode lead usually identified?

A) With a stripe

Q) Which of the following circuits combines a speech signal and an RF carrier?


NJ2X Notes:
What the heck is a modulator anyway?  For the unintiated, the word modulation is somewhat strange.  In field of music, the word modulation refers to the act or process of changing from one key to another.  In the context of radio, modulation is the process of varying one or more parameters (amplitude, phase, frequency) of a waverform with a modulating signal.  It is the modulation which imparts information to the signal being transmitted.  The information can be in the form of an on/off tone as in CW, voice, music, or a stream of data.
on February 24, 2014

We enjoy using a Byonics TinyTrak4 as an APRS TNC when operating portable with an HT in the back country.  This remarkable device, when coupled with an HT, transmits GPS position to amateur radio APRS receivers that pass the information along to the Internet.


The Byonics TinyTrak4 can run on 9v to 12v and the adapter cable is wired with Anderson PowerPole connections.  We prefer to keep our pack weight to a minimum when hiking so a 9v battery is an excellent choice.

Our first design was to simply solder a 9v battery clip to a pair of Anderson PowerPole connectors.  This worked well; however, we found it was also rather fragile and it didn't take long for the whole thing to fall apart.

While rummaging around our junk box we noticed a diminutive mint tin slightly larger than a 9v battery and this became the inspiration for an improved battery pack design.  The basic idea is to use heavier gauge wire for the Anderson PowerPole connectors and hide the battery and fragile 9v clip inside the tin.  Adding a switch would provide a convenient way to switch power on/off (there is no switch on the TinyTrak4).


Other related articles on NJ2X.COM

© Michael W. Maher and NJ2X.COM, 2014. Unauthorized use and/or duplication of this material without express and written permission from this blog’s author and/or owner is strictly prohibited. Excerpts and links may be used, provided that full and clear credit is given to Michael W. Maher and NJ2X.COM with appropriate and specific direction to the original content.
on February 23, 2014

Q) What device increases the low-power output from a handheld transceiver?

A) An RF power amplifier

NJ2X Notes:
An interesting example of a commercial RF power amplifier designed for use with an HT is the Mirage Dual Band Handheld Amplifier, which includes the 144/440 MHz segments.  Feeding 1-7 watts in from an HT, it will put out 45/35 watts respectively. It is also capable of full duplex operation, allowing the user to transmit on one band and listen on the other - provided that the handheld you're using is capable of this function.
on February 23, 2014

Heinrich Rudolf Hertz was born this day February 22, 1857.  Hertz was a physicist who clarified and expanded the electromagnetic theory of light that had been put forth by Maxwell.  He was the first to conclusively prove the existence of electromagnetic waves by engineering instruments to transmit and receive radio pulses using experimental procedures that ruled out all other known wireless phenomena.

Email ThisBlogThis!Share to TwitterShare to FacebookShare to Pinterest
Labels: Birthday

Q) What are the names of the two electrodes of a diode?

A) Anode and cathode 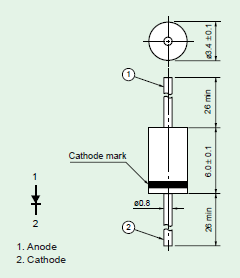 Q) What is the function of a mixer in a superheterodyne receiver?

A) To shift the incoming signal to an intermediate frequency

NJ2X Notes:
In radio, mixers are used for frequency conversion.  The mixer converts RF at one frequency into RF at another frequency. 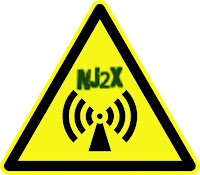 Q) Which of the following circuits demodulates FM signals?

NJ2X Notes:
A discriminator is a circuit that converts a property of an input signal, such as frequency or phase, into an amplitude variation, depending on how the signal differs from a standard or reference signal.
on February 20, 2014

Q) What class of electronic components is capable of using a voltage or current signal to control current flow?

NJ2X Notes:
Many consider the transistor to be one of the greatest inventions of the 20th century.[ There are many different varieties of transistors including:

Q) What device takes the output of a low-powered 28 MHz SSB exciter and produces a 222 MHz output signal?


NJ2X Notes:
A transverter are used with transceivers to change the range of frequencies over which the transceiver can communicate.  A transverter has both a receiver converter and a transmitter converter.  Down East Microwave is an example of a company selling transverters for amateur radio use.

Q) What electronic component allows current to flow in only one direction?


NJ2X Notes:
There are many different varieties of diodes including:

NJ2X Notes:
If you are interested in making a great little ham radio related LED project be sure to checkout Anderson Powerpole Polarity Checker

Q) Which of these components can be used as an electronic switch or amplifier?

Q) Which of these components is made of three layers of semiconductor material? 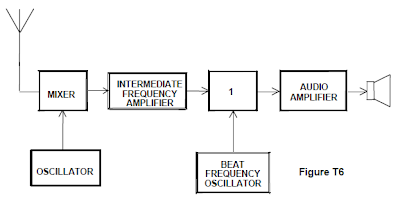 Q) What type of receiver is shown in Figure T6?

NJ2X Notes:
"Heterodyne" comes from the Greek roots hetero- which means "different", and -dyne which means "power".  Edwin Armstrong invented the heterodyne receiver in 1918.
on February 13, 2014

Q) What is the nominal voltage of a fully charged nickel-cadmium cell?

NJ2X Notes:
A nickel-cadmium cell is more commonly referred to as a, "NiCad battery".  A NiCad battery is a type of rechargeable battery using nickel oxide hydroxide and metallic cadmium as electrodes.  NiCads have a relatively low internal resistance, they can supply high surge currents which makes them a good choice for portable radio transceivers.
on February 12, 2014

Q) Which of the following is commonly used as a visual indicator?
A) LED

NJ2X Notes:
LEDs (Light Emitting Diode) are replacing incandescent and other less efficient forms of lighting.  This replacement has been evident for years now in low wattage lighting applications such as indicator lights and back lighting on radios.  Higher wattage lighting is now also being replaced by LEDs.  We use Philips LED light bulbs throughout our home and really love the how they have reduced our power bill while producing an excellent quality of light that lasts.
From the FCC Element 2 Technician Class Question Pool
Effective July 1, 2010 for examinations  and is valid until June 30, 2014
on February 11, 2014

Q) Which of the following stations transmits signals over the air from a remote receive site to a repeater for re-transmission?

In a situation where an amateur station, such as a repeater, is under remote control over a radio link, the other station involved (doing the controlling) is called an auxiliary station.

Per Part 97 FCC: "An amateur station, other than a message forwarding system, that is transmitting commu­nications point-to-point within a system of cooperating amateur stations [97.3(a)(7)]."

There are a few important rules that apply to auxiliary stations:

A) A United Nations agency for information and communication technology issues.

The ITU allocates global radio spectrum and satellite orbits, develops technical standards that ensure networks and technologies seamlessly interconnect, and strive to improve access to information and communication technologies to underserved communities worldwide.  ITU is headquartered in Geneva, Switzerland, and has twelve regional and area offices around the world.
on February 09, 2014

Q) Which amateur band are you using when your station is transmitting on 146.52 MHz?


NJ2X Note:
Consulting the 2 meter band privileges granted by the FCC we can see that 146.52 MHz falls within the frequency range that US hams are allowed to operate.

Computer science is no more about computers than astronomy is about telescopes. -- Edsger Dijkstra
on February 07, 2014

Q) What is the FCC Part 97 definition of telecommand?

A) A one-way transmission to initiate, modify or terminate functions of a device at a distance.

NJ2X Note:
Telecommand is when you are using a radio or wire line link to remotely control a station. A common application for telecommand is to control an amateur radio repeater or a satellite station.
on February 07, 2014

Q) What is the voltage across a 2-ohm resistor if a current of 0.5 amperes flows through it?

NJ2X Notes:
Ohm's Law was discovered by Georg Simon Ohm and is worth committing to memory: 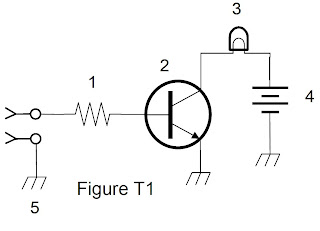 
NJ2X Notes:
Check out NJ2X.COM for other FCC Technician Exam questions related to the schematic symbol.
on February 05, 2014

NJ2X Notes:
A battery stores energy.  It is made of one or more electrochemical cells that convert stored chemical energy into electrical energy.  Each cell contains a positive terminal (cathode) and a negative terminal (anode). Electrolytes allow ions to move between the electrodes and terminals, which allows current to flow out of the battery to perform work (e.g. powering your ham radio).

Check out NJ2X.COM for other FCC Technician Exam questions related to the schematic symbol.
on February 05, 2014

Q) What electrical component is used to oppose the flow of current in a DC circuit?


NJ2X Notes:
These are axial lead resistors on a tape dispenser:


Ohms is the unit of measure for resistance.  The current through a resistor is in direct proportion to the voltage across the resistor's terminals.  Ohm's law relates current (I) with voltage (E) and resistance (R):

Q) What electrical parameter is controlled by a potentiometer?

NJ2X Notes:
The potentiometer is a variable resistor.  There are many different varieties.

Q) What is the voltage across a 10-ohm resistor if a current of 1 ampere flows through it?

NJ2X Notes:
Ohm's Law was discovered by Georg Simon Ohm and is worth committing to memory:

Q) What is the FCC Part 97 definition of telemetry?

A) A one-way transmission of measurements at a distance from the measuring instrument.

NJ2X Notes:
Telemetry is a technology that allows remote measurement and reporting of data. The word is derived from Greek roots tele = remote, and metron = measure. Amateur applications include transmitting measurements from amateur radio satellites, model rockets, and balloons, aircraft, and weather stations. 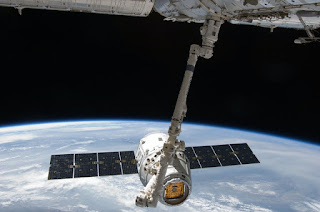 Q) What is the FCC Part 97 definition of a space station?

A) An amateur station located more than 50 km above the Earth's surface.

NJ2X Note:
Did you know that as a licensed amateur radio operator you can actually communicate with astronauts in space?  Yes, it is true.  Manned missions typically include one or more amateur radio operators in the crew.   Missions are also equipped with radios capable of operating on amateur radio, including frequencies available to technician class license holders.
on February 01, 2014