There are in fact two things, science and opinion; the former begets knowledge, the latter ignorance.  -- Hippocrates
on September 25, 2015 No comments:

Finished 20 Meters WAS award from California

Thanks to AB1NJ in Vermont today, we completed the WAS award for 20 Meters (from California) with a JT-65 contact.

Chasing ARRL awards is good fun.  Awards also encourage radio amateurs to stay active which is good for the hobby.  The LoTW makes it easy to keep track of all the contacts for the various awards.  Looking for the next award which will likely be Phone DXCC.  So many interesting and challenging choices...

Sunday's are a perfect day for reflection and inspiration.  We were inspired today by Anna Veal, W0ANT, who is the 2015 Hiram Percy Maxim Award Recipient.  This article also appears in the October 2015 edition of QST on page 82.  If you haven't read the article then do yourself a favor and read it now.
Good DX and 73, NJ2X
on September 20, 2015 No comments:

Using a Diamond HV7A Mobile Antenna as a stealth base antenna

We recently had need for a multiband stealthy antenna covering 70cm, 2m, 6m, 10m, and 20m.  The stealth requirement meant that the antenna had to be near invisible on a rooftop as seen from the ground level.  After evaluating our options (beam, traditional full-size base vertical, wire) we were unsatisfied.  None of the choices seem to meet the prime criteria of invisibility.

This prompted us to consider the use of a multiband mobile antenna which tend to be constructed with a minimal profile.  We eventually settled on the Diamond HV7A as it offered multiband coverage that met our needs in a rather stealthy package.


We mounted the antenna on our rooftop and it was amazingly difficult to see from the ground level.  This was exactly what we had hoped for in terms of physical appearance.  We have been satisfied with the HV7A though performance as a stealthy base antenna is a compromise due to its intended purpose as a mobile antenna.

The Apple Podcasts application provides yet another vehicle for enjoying amateur radio through ham radio oriented shows.  Here is our list of favorite Podcasts programs:

Vacationing on a motorcycle...

“You see things vacationing on a motorcycle in a way that is completely different from any other. In a car you're always in a compartment, and because you're used to it you don't realize that through that car window everything you see is just more TV.” ― Robert M. Pirsig, Zen and the Art of Motorcycle Maintenance: An Inquiry Into Values 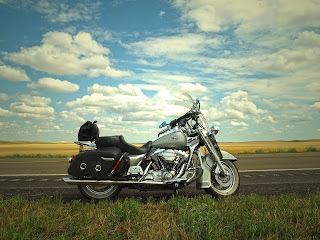