In this article, KC2VSR builds another of the inexpensive and fun Velleman kits: The Brain Game.  Nothing better in the winter than father and son time in the workshop building something.  NJ2X had to put down the soldering iron and take a break from working on the KN-Q7A Single Band SSB Transceiver Kit to give KC2VSR a shot at this Christmas kit.

The Brain Game Kit has a lot of great attributes as a kit for young people or anyone just learning to solder.
First step in approaching any new kit is to read the instructions.  The Velleman graphic design instructions are so much better for kids than step-by-step text instructions.  Very little coaching of the builder was required.

The ritual of inspecting, identifying, and laying out the components is an important part of the kit building experience.  Our builder chose to group LEDs, semiconductors, resistors, switches, and "other".  Simple and fun process that yields learning at the same time.


The building went very smoothly without any errors.  Things to watch out for include reversing the orientation of the semiconductors (diodes, transistor, or integrated circuit).

After soldering the last component in place, we inspected all the joints looking for defects such as solder bridges or cold solder joints.  None were found - nice job!  We then used rubbing alcohol and Q-tips to remove the excess flux from the board.


KC2VSR was so excited to power up the kit and collected three AA batteries.  Two of the batteries were from the "new battery storage" and the last two remaining.  Rats!  KC2VSR scrounged up one more from somewhere.  All three batteries were put into the kit's battery pack and the LED's came on.  Good sign.  After a few moments of button pushing and blinking lights it was apparent that the kit was not functioning.  Rats again!

A Teachable Moment
One of the skills that hams and kit builders need is the ability to diagnose and correct problems (not a bad skill to have in life too).  The non-functioning kit presented an nice opportunity to grow this skill.  We went through the following checks together:
Well what else could it be?  The LED's were bright so battery didn't seem likely.  If the batteries were dimly lit then perhaps.  Well that is an interesting potential failure though.
KC2VSR immediately went scrounging again for a 3rd "good" AA battery.  Digging around in the battery storage area yielded one last AA hidden in the back.  With great anticipation it was slipped into the battery case..... and VOILA the kit worked!

After a short celebration and a few whoops and high-fives, KC2VSR and NJ2X commenced with playing several rounds of the brain game in the work shop.  The game is a lot of fun and is similar to the old Simon game from the 80's.  The object is to repeat a sequenced pattern presented by the game by pushing one of four buttons in the correct order.  The sequence is built up incrementally.  The brain game has 20 levels of difficulty which keeps the player interested and challenged.

This kit reinforced learning in several ways:
If you are interested in building this The Brain Game Kit yourself or giving it to a new builder, you can buy these on-line or in stores that are Velleman dealers.

What can you do with an oscilloscope?

This is an oscilloscope:
An oscilloscope is a test instrument that displays a graph of voltage verses time which allows the user to visualize electronic waveforms. The vertical axis displays voltage and the horizontal axis is time. Modern oscilloscopes are either analog or digital. It is a must-have piece of equipment for experimenting or working on electronics and very useful to radio amateurs in general.

So what can  you do with an oscilloscope?
By NJ2X 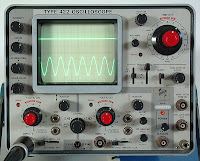 This is a first rate presentation regarding oscilloscopes and we highly recommend it to anyone interested in this versatile piece of test equipment.