The pileups on PT0S (DX Expedition to Saint Peter & Saint Paul Rocks) this weekend were a mile tall.  A friend jokingly referred to it as a, "pigpile".  Maybe "pachyderm pile" would be more descriptive.  It was huge at times.

Anarchy reigned at moments with unruly lids running wild while the "radio police" attempted ad-nauseum to clear the DX frequency with shouts of "up up" or "get it together" or "he is working split tuner-upper" or "shut up" or "why the heck do you guys call on frequency?" or "split expletive-deleted".  Do the radio police interfere more than the hams that call the DX on his frequency?  There are three steps to avoiding the transgression of calling a DX station working split:  listen, listen, and then listen.

There was an unusually high degree of malicious ankle biter interference.  It didn't amount to much and tended to be weak, feeble, and ultimately impotent.  The DX kept tossing out calls and "599" and the hams just kept dropping their calls into the cacophony.  The whole DX operation ran like a big machine right over the top of the malicious ankle biters.

An apparently disgruntled ham came on the frequency (3.780 MHz) to complain about being interfered with on a nearby frequency.  This ruse was of course designed to get a response and create a feedback loop of interference.   It did seem to draw in a few and a useless shouting match ensued.  For many, it was embarrassing to listen to their own countrymen behaving so badly.  The DX station never missed a beat while dishing out a rapid fire stream of signal reports through the entire episode.

The correct response to malicious interference of any kind is to ignore it completely.  Malice driven interference runs on an ego-powered AAA-battery.  Starved of attention the egoist and his petty interference withers and fades away.

What does all this bad behavior mean?  If you are in the glass-is-half-empty camp then perhaps this is yet another indicator of the steady decline of our civilization.  However, if you are a glass-is-half-full person then perhaps you enjoy the challenge of cracking such a chaotic pileup.  If you are in the glass-is-all-full-because-it-is-full-of-air-too camp then you perhaps recognize the incredibly superb job the PT0S DX Expedition did.

Nothing says thank you to a DX Expedition more than a donation to fund the costly endeavour. 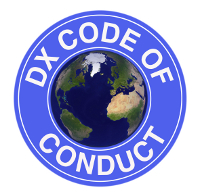 © Michael W. Maher and NJ2X.COM, 2012. Unauthorized use and/or duplication of this material without express and written permission from this blog’s author and/or owner is strictly prohibited. Excerpts and links may be used, provided that full and clear credit is given to Michael W. Maher and NJ2X.COM with appropriate and specific direction to the original content.
on November 13, 2012