I admit it.  I like to save money and I love to home brew, repurpose, and recycle.  Ham radio seems to fit really well with this way of thinking.  A ham radio project is simply more fun when you are engaged with your own two hands and applying your own creativity.  Some my call it being "thrifty" but it really goes well beyond the dollars and cents.  Fundamentally, it is the human need to create that is at work here.

I had an idea for a project that involved interfacing our Kenwood HT audio-in and push-to-talk switch.  I mulled over various approaches including buying and soldering 3.5mm and 2.5mm jacks.  Using two jacks would certainly work and was easy-enough but the result would not looks as nice as the commercial dual-prong moulded connector used on the HT's headset.

I happened on a super-cheap eBay listing for Kenwood HT clone cables and decided to buy one.  This cable would give a dressed appearance on the HT side for our home-brew the interface.  The cable arrived and went into a box (along with the month-balled project) for several months due to a relocation.
﻿

Skip forward to the present... I dug the project out of its mothball status and pulled out my Kenwood technical documentation, solderless breadboard, capacitor, resistors, digital multimeter and got to work.  However, no matter what was tried I could not get the HT interface to work.  After a series of fruitless attempts with checking and double-checking the circuit I realized that something wasn't working as it should.

The next step was to isolate the fault.  The first step was to check all of the alligator clips.  We had run into a faulty clip-wire connection with a past project.  The clips and wires all checked out fine.  Next tested our ability to trigger the push-to-talk through the cable manually.  Strangely this did not work as expected so we decided to test the continuity of the cable itself using our digital multimeter.

The multimeter continuity testing immediately showed that only one of the six contacts had continuity through the cable.  That is a strange problem for a brand new commercial quality cable.  Caveat emptor (corollary: especially when buying through eBay).

The next step was to cut the cable in half and check for continuity between the wires and the two plug contacts.  If only one side was defective then the other could be salvaged for use in the project.  When the the cable was cut and wires exposed, only 4 wires were found. 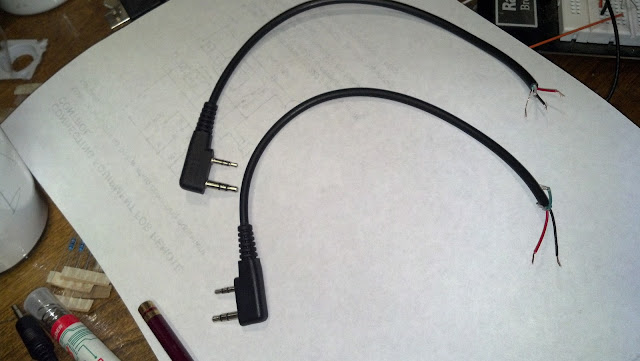 There are were six contacts on each plug and not all are needed during the "cloning" procedure (copying the memory of one HT to another).  Further testing showed that neither cable-end had electrical continuity to more than one of the wires.  This test eliminated the possibility of the defect being only one-sided.   The dissection again proved that this was a totally defective HT clone cable.

So what did we learn from this experience:


© Michael W. Maher and NJ2X.COM, 2013. Unauthorized use and/or duplication of this material without express and written permission from this blog’s author and/or owner is strictly prohibited. Excerpts and links may be used, provided that full and clear credit is given to Michael W. Maher and NJ2X.COM with appropriate and specific direction to the original content.
on February 23, 2013