Project: Hacking the Nomad 7 Solar Panel for Amateur Radio Use


In this post, we explain step-by-step how we modified the Nomad 7 solar panel to make it more convenient to use in amateur radio applications.

Goal Zero has made a very handy little solar panel in the Nomad 7.  It provides power via a USB port and a 12Vdc port.  This makes it possible for us to recharge our iPhone (5V USB) and Kenwood TH-F6A (12Vdc) from the Nomad 7.  One of the great things about standards is how many of them there are. There are innumerable standards for 12v power connectors.  We prefer the Anderson Powerpole connector for our 12Vdc applications.  Unfortunately, the Nomad 7 provides 12Vdc via an 8mm connector.


In order to connector our Kenwood TH-F6A to the Nomad 7 we would need to make a pigtail.  We considered purchasing Goal Zero's 8mm female to 4.7mm male pigtail assembly for $4.99 and then cutting off the 4.7mm connector and replacing it with an Anderson Powerpole.  However, this seemed like unnecessarily complex solution that would add weight and cost.  Weight comes at a high cost for backpackers.
After talking this over with our friends at Santa Cruz Electronics we came to the conclusion that the simplest, least weight, and lowest cost approach would be to simply cut off the 8mm male connector from the Nomad 7 and solder on an Anderson Powerpole.


Replacing the 8mm male connector with an Anderson Powerpole

Step 4: Solder (or crimp) on the Anderson Powerpole contacts 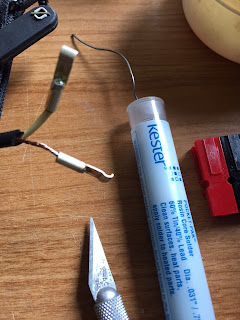 Articles in this series:

Other related articles on NJ2X.COM