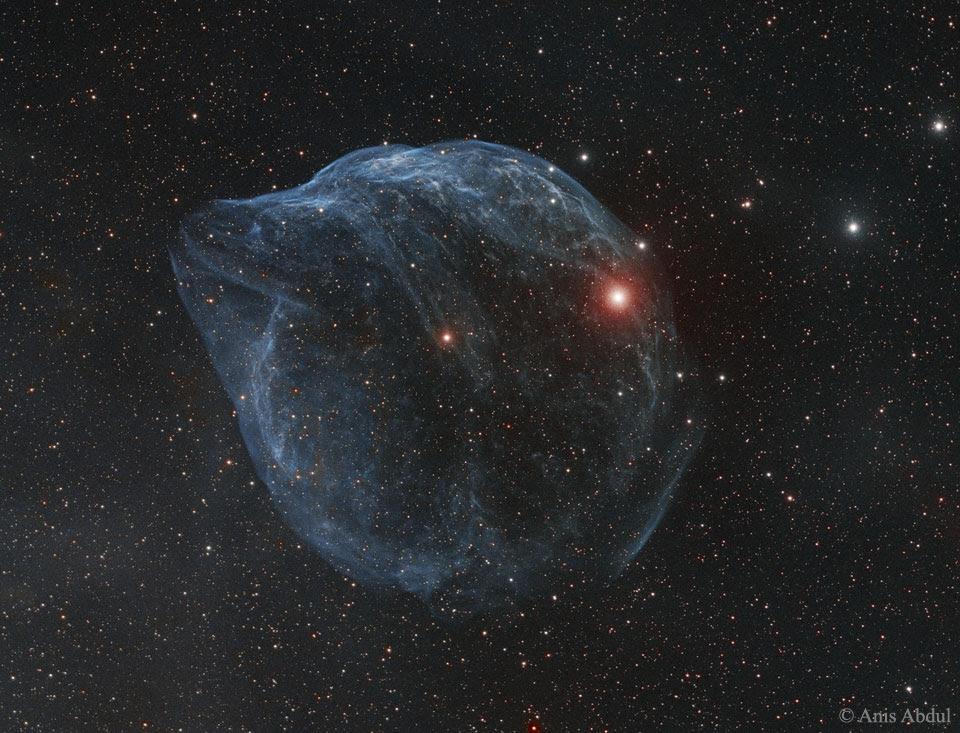 Blown by fast winds from a hot, massive star, this cosmic bubble is huge. Cataloged as Sharpless 2-308 it lies some 5,200 light-years away toward the constellation of the Big Dog (Canis Major) and covers slightly more of the sky than a full moon. That corresponds to a diameter of 60 light-years at its estimated distance. The massive star that created the bubble, a Wolf-Rayet star, is the bright one near the center of the nebula. Wolf-Rayet stars have over 20 times the mass of the Sun and are thought to be in a brief, pre-supernova phase of massive star evolution. Fast winds from this Wolf-Rayet star create the bubble-shaped nebula as they sweep up slower moving material from an earlier phase of evolution. The windblown nebula has an age of about 70,000 years. Relatively faint emission captured in the expansive image is dominated by the glow of ionized oxygen atoms mapped to a blue hue. via NASA http://ift.tt/2gXLXYn
Astronomy Photo NASA

Here comes Jupiter! NASA's robotic spacecraft Juno is continuing on its 53-day, highly-elongated orbits around our Solar System's largest planet. The featured video is from perijove 11, the eleventh time Juno has passed near Jupiter since it arrived in mid-2016. This time-lapse, color-enhanced movie covers about four hours and morphs between 36 JunoCam images. The video begins with Jupiter rising as Juno approaches from the north. As Juno reaches its closest view -- from about 3,500 kilometers over Jupiter's cloud tops -- the spacecraft captures the great planet in tremendous detail. Juno passes light zones and dark belt of clouds that circle the planet, as well as numerous swirling circular storms, many of which are larger than hurricanes on Earth. After the perijove, Jupiter recedes into the distance, now displaying the unusual clouds that appear over Jupiter's south. To get desired science data, Juno swoops so close to Jupiter that its instruments may soon fail due …

Combined image data from the massive, ground-based VISTA telescope and the Hubble Space Telescope was used to create this wide perspective of the interstellar landscape surrounding the famous Horsehead Nebula. Captured at near-infrared wavelengths, the region's dusty molecular cloud sprawls across the scene that covers an angle about two-thirds the size of the Full Moon on the sky. Left to right the frame spans just over 10 light-years at the Horsehead's estimated distance of 1,600 light-years. Also known as Barnard 33, the still recognizable Horsehead Nebula stands at the upper right, the near-infrared glow of a dusty pillar topped with newborn stars. Below and left, the bright reflection nebula NGC 2023 is itself the illuminated environs of a hot young star. Obscuring clouds below the base of the Horsehead and on the outskirts of NGC 2023 show the tell-tale far red emission of energetic jets, known as Herbig-Haro objects, also associated with newborn stars. via NASA http://i…

The striking X in this lunarscape is easily visible in binoculars or a small telescope, but not too many have seen it. The catch is, this lunar X is fleeting and only apparent in the hours before the Moon's first quarter phase. Along the shadow line between lunar day and night, the X illusion is produced by a configuration of craters seen here toward the left, Blanchinus, La Caille and Purbach. Near the Moon's first quarter phase, an astronaut standing close to the craters' position would see the slowly rising Sun very near the horizon. Temporarily, crater walls would be in sunlight while crater floors would still be in darkness. Seen from planet Earth, contrasting sections of bright walls against the dark floors by chance look remarkably like an X. This sharp image of the Lunar X was captured on February 22nd. For extra credit, sweep your gaze along the lunar terminator and you can also spot the Lunar V. via NASA http://ift.tt/2HSh71Q