It is the biggest day of the shopping all year... Black Friday.  Rumours were flying all over town about an unprecedented sale which had been confirmed by recent radio spots for, "Extreme Pricing with 99% off!".  As a result, a long line had already formed at 6:30AM in front of the store.  By 8:30AM the line had doubled in length and had become a little surley.

A small man pushed his way to the front of the line, only to be pushed back, amid a barage of curses.

On the man's second attempt, he was knocked around a bit, and then thrown to the end of the line again.

As he got up the second time, the small man said to the person at the end of the line, "That does it!  If they throw me down one more time, I am not going open the store!" 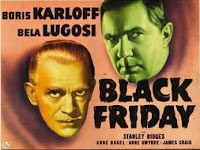 Avoid the lines and hassles and visit your local Amateur Radio dealer instead this Black Friday.  You will likely have a lot more fun, see some new gear, and may even take home a little something for the shack.
on November 25, 2011