So what happens to window line in a lightning strike?

So what happens to window line in a lightning strike?

We had the opportunity to inspect sections of window line that had been subjected to the effects a lightning strike.  Interestingly, the copper wire was completely absent from the plastic.  Copper vampires? 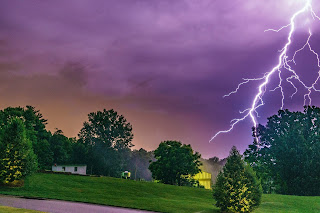 There were a few clues.  The first clue was in the form of copper color specs on the insulation - almost as though it had been lightly and randomly sprayed on by a spray can.  An additional clue was the plastic which showed evidence of violent heating and had two burnt tracks running along where the copper had once been.

All the clues pointed to the copper having been completely vaporized in an instant by the lightning.  This must have been an incredibly violent moment and would have been frightful to witness.  Lightning is an extremely powerful force - it can have 100 million to 1 billion volts, and contains billions of watts.  As lightning passes through air, it can heat the air to 50,000 degrees Fahrenheit: about 5 times hotter than the surface of the sun.